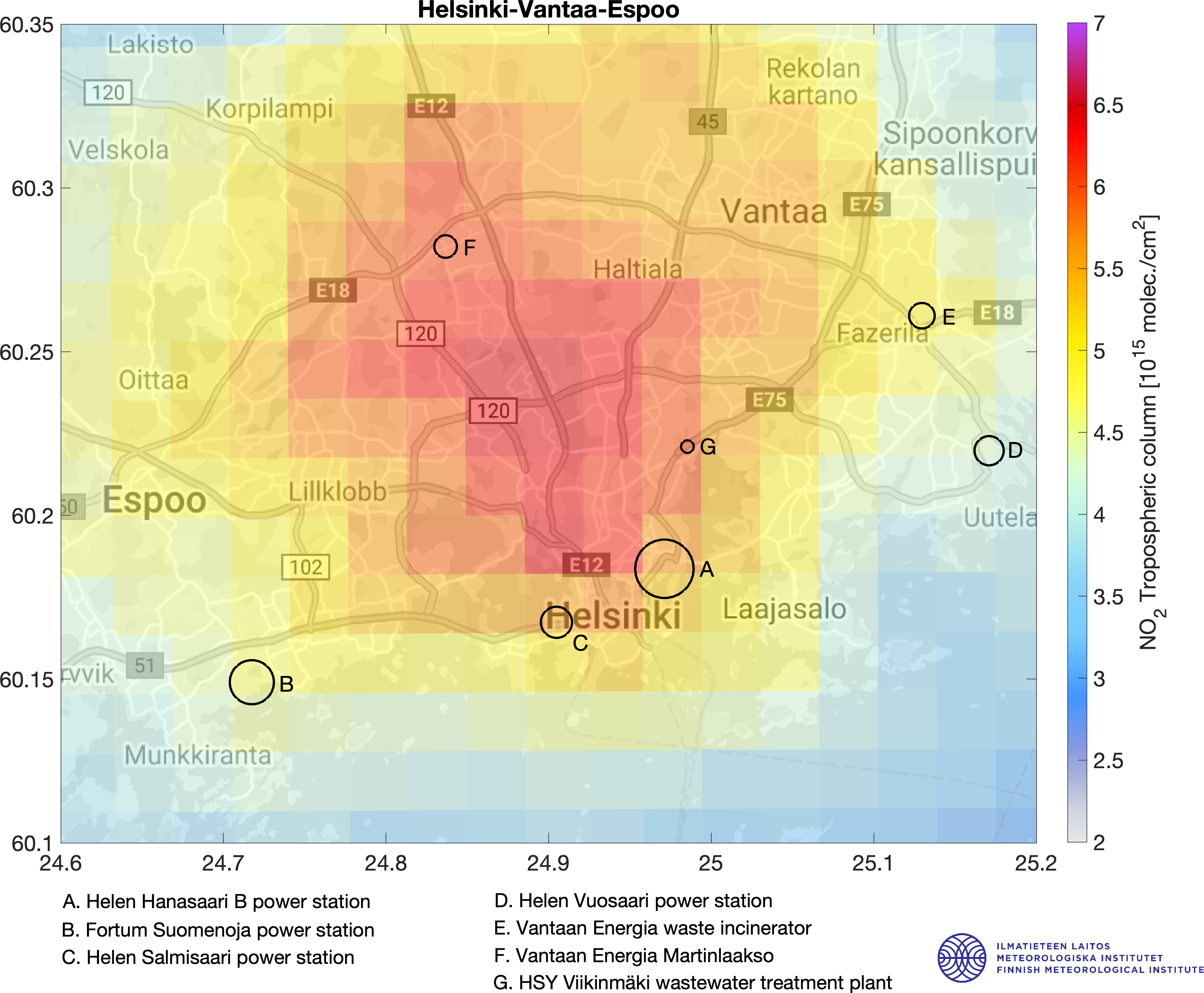 This online platform provides maps of nitrogen dioxide (NO2) concentrations over Finnish cities. The maps are based on annual averages of the tropospheric NO2 retrievals obtained by the Copernicus TROPOMI/Sentinel-5P satellite instrument. NO2 is an air pollutant mainly generated by combustion processes from anthropogenic pollution sources (including transportation, energy production and other industrial activities). Concentrations of short-lived gases like NO2 can be used as proxies of NO2 emissions when averaged in time and space, since averaging removes some of the short-term variability due to changing meteorological conditions.

The service is part of the Health showcase of the EU 2020 e-shape project (Pilot 2.3 EO-based pollution-health risks profiling in the urban environment). The service maintenance and the data analysis are carried on at the Space and Earth Observation Centre at the Finnish Meteorological Institute. The retrieval of the TROPOMI NO2 product was developed at KNMI and the data are distributed via the ESA Sentinel hub. Further information about the service and the data used can be found here or you can contact the responsible investigator Iolanda Ialongo, FMI.

The maps show the average of the satellite-based NO2 tropospheric columns retrieved from TROPOMI (TROPOspheric Monitoring Instrument) over the period 1.4.-30.9.2019. The data have been gridded at 2 km spatial resolution using oversampling (i.e., gridding smaller than the original TROPOMI pixel size; Sun et al. 2018). In order to enhance the NO2 signal close to the emission sources, only TROPOMI data corresponding to calm wind conditions (wind speed smaller than 3 m/s) have been included in the maps. TROPOMI is the only instrument onboard the ESA’s Sentinel 5 Precursor (S5P) satellite and it is part of the EU Copernicus Earth Observation program (Veefkind et al., 2012). Van Geffen et al. (2019) have described in detail the TROPOMI NO2 retrieval algorithm. TROPOMI/S5P data are openly available via the ESA Sentinel hub. TROPOMI NO2 products are routinely validated against ground-based reference measurements at global level and in Finland in particular (Ialongo et al., 2020).

The black circles in the maps indicate the known stationary NO2 emission sources from the E-PRTR database. The size of the circle is proportional to the 2017 annual emissions. The rest of the emissions come from the transportation sector (road and shipping). Note also that the NO2 maps over different Finnish cities have different colorscale ranges, so the colors cannot be directly compared from one map to the other. The NO2 map over Finland is shown here.

Nitrogen dioxide (NO2) is a polluting gas produced from fossil fuel combustion processes, i.e. from transportation, energy production and industrial processes. NO2 participates to the formation of tropospheric ozone and nitrate aerosols and has negative effects on human health and the environment. NO2 is a short-lived gas and therefore can be found in high concentrations close to the emission sources. It is worth noting that NO2 columns observed from space are not the same as NO2 emissions because the NO2 column amount in the atmosphere depends on the local emissions, chemistry and transport. Nevertheless, NO2 columns can be used as a proxy of NO2 emissions if averaged in time and space, as done in these website maps.

Note also that satellite instruments measure the NO2 concentrations as molecules per unit area in the atmospheric column from the Earth surface to the tropopause (unit of molec./cm2). On the other hand, traditional air quality stations measure NO2 concentrations at the surface (unit of microg/m3), which is a different quantity and cannot be directly compared to satellite observations.

Also, TROPOMI observations are only available 2-3 times a day over Finland, around 11-15 local time. The S5P satellite overpass time typically corresponds to the NO2 daily local minimum between the morning and afternoon peaks due to commuter traffic, while in situ air quality measurements are available at high temporal resolution throughout the day. In addition, since satellite-based NO2 retrievals are based on the solar light reflected from the earth’s surface and atmosphere back to the satellite, TROPOMI NO2 retrievals are not available during the night, during winter at high latitudes or under cloudy conditions. On the other hand, satellite retrievals have daily global coverage and can complement traditional air quality information where the latter are not available.